Two things have always stuck with me about Brave. First, Merida's hair. It's an absolute triumph of CGI. It involves 1,500 curls of hair and a huge amount of physics simulation work to get it to move correctly, and took three years to get right. That's some dedication, and it looks awesome. 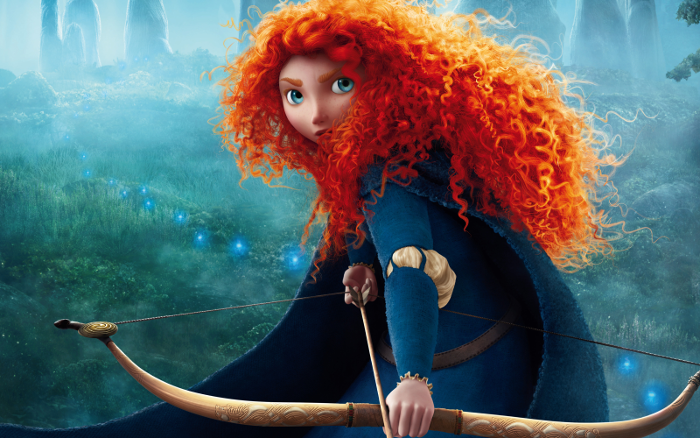 The second is something that I was put onto by a Facebook post from a friend of mine before I'd even seen the film. She made the point that while Brave claims to be about our ability to change our fate, Merida actually does nothing of the sort. All the major events of the film are kicked off by Merida following the wisps that, we are told right at the start, are supposed to "lead you to your fate". Wisps lead her to a witch's cottage, where she gets a spell to "change" her mother, Elinor. Unfortunately, it changes her into a bear. Wisps then lead Merida and Elinor (still a bear) to an abandoned castle where it's clear that the same curse has run its course before. Here they realize that to break the curse they need to repair a tapestry that Merida ripped in anger. Finally, Merida is led to the location of the climax of the film by a trail of wisps, where her mum is about to be killed by her dad, Fergus, who doesn't realize what's happened.

And yet, at the same time, the events of the film teach Merida about her own, personal moral responsibility. In the early parts of the film, she refuses to take the blame for anything. When her mum is turned into a bear, Merida refuses to take responsibility and blames the witch. But at the climax of the film, where Merida is terrified that Elinor will be stuck as a bear forever, she instead sobs "I'm sorry, this is all my fault, I did this to you, to us." 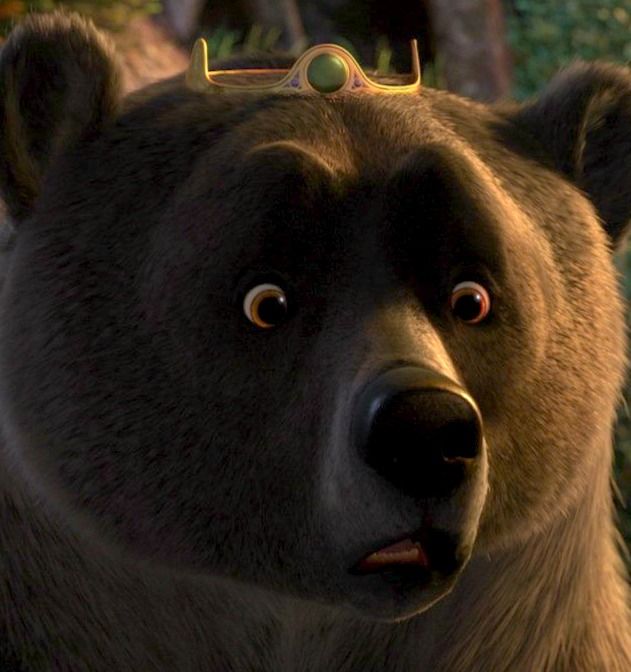 Wait, these things are both true at the same time?!
(Image: Disney/Pixar)

This looks rather paradoxical — are we responsible for our actions, or are they laid out for us ahead of time? — but to the Christian it illustrates a recurring Biblical theme: God is sovereign (everything happens according to his plan[1]), but at the same time we are moral creatures who are responsible for our actions. The Bible is totally unashamed at putting these two ideas side by side — check out Jesus' own words in Matthew 11:

“Come to me, all you who are weary and burdened, and I will give you rest. Take my yoke upon you and learn from me, for I am gentle and humble in heart, and you will find rest for your souls. For my yoke is easy and my burden is light.”

Jesus is saying two things here. First, that we can't know the Father unless the Son (Jesus) reveals him to us. In other words, no-one can become a Christian without God being at work in them. But second, Jesus calls people to come to him. He makes an offer that calls for a response. We become Christians by turning to God.

Even the run-up to Jesus' death reflects this idea. Jesus always knew what lay ahead of him, that he would be betrayed and crucified in order to become a sacrifice for our sins. And yet Judas Iscariot is held responsible for his decision to betray Jesus. In Matthew 26 Jesus says:

The Son of Man will go just as it is written about him. But woe to that man who betrays the Son of Man! It would be better for him if he had not been born.

It's a tough idea to wrap our heads around (it probably doesn't help that we're terrible at thinking fourth-dimensionally), but Brave's analogy is a pretty good one. Granted, it talks about "fate" rather than God's sovereignty, and there are brief monologues about fate at each end of the film, neither of which are worth memorizing. But the events of the film, driving home both Merida's responsibility for her actions and that she always ends up where she was meant to be, are, I think, a helpful illustration for a concept that we struggle with.

I don't want to end there, though, because once you start thinking about God's sovereignty, it's only natural to ask at some point "hang on, does that mean God is responsible for evil?", so I want to address that briefly as well.

The Bible is consistently clear that God is good, and perfect, and that there is no evil in him. But it is also clear that he uses evil to bring about his good purposes. Judas's betrayal was an evil act that God used to bring about salvation. Another good example is Joseph (he of Technicolour Dreamcoat fame). His brothers hate him, and sell him into slavery to get rid of him, but he ends up running Egypt on behalf of Pharaoh[2] and is able to avert a famine, saving both the Egyptians and his own family. When Joseph is finally reunited with his brothers, he says:

You intended to harm me, but God intended it for good to accomplish what is now being done, the saving of many lives.

Once you've thought that through, it's then natural to take a step back and ask "using evil is one thing, but why doesn't God just wipe evil out?" There are at least two reasons for this. During all the heart-hardening I mentioned in Exodus, God sends Moses to Pharaoh with this message:

For by now I could have stretched out my hand and struck you and your people with a plague that would have wiped you off the earth. But I have raised you up for this very purpose, that I might show you my power and that my name might be proclaimed in all the earth.

Pharaoh can't claim to have been treated unfairly by God. Everything he had, from his existence to the throne of Egypt, he received from God. But Pharaoh rejected God, his maker, and oppressed his chosen people despite repeated warnings. The way God responds to this evil shows us his character — his judgement of evil, his patience, and his determination to save a people for himself. And the saving part is important, because although many people have argued that a good, omnipotent God should put a stop to evil right now, the other reason he allows evil to continue is because he loves us. Wiping out evil would mean wiping out us, but instead God launched a rescue plan to save us from the just punishment we deserve at his hand. The very evil nature that led Judas to betray Jesus is precisely what Jesus came to rescue us from. God has promised to deal finally with evil one day, but he doesn't wipe out evil now because he hasn't finished saving people yet.

And for this reason I'm very glad that God is the one in charge of the universe, not a bunch of wisps. They're fairly cute, but they're agents of "fate" as some kind of impersonal force. But God is our loving Creator. Paul is able to say in Romans:

And we know that in all things God works for the good of those who love him, who have been called according to his purpose.

Which is not to say that everything that happens to a Christian is good, awful things happen to Christians just like everyone else, but that even in those things God is working for the good of his people. The God running the universe is the same God who sent his Son to die for me because he loves me. I'm responsible for my sins, but God used all my decisions, right and wrong, to bring me to the point where I realized I needed to turn to him for forgiveness, and he will bring me all the way into his new creation.

The final step in this line of questioning is to ask "why did God set up the universe so that evil exists in the first place?" This one is much harder to answer, for the simple reason that the Bible doesn't tell us. It doesn't even raise the issue. Mind you, in many ways the question is the same as "why doesn't God wipe out evil now?" but with the tenses changed, so some aspects of the answer may be similar. In any event, down the centuries countless people have wrestled with the question of why God put the tree of the knowledge of good and evil in the Garden of Eden.

But whatever the answer is, what I do know is that God is good. He doesn't abandon us to our sins. Jesus came and died to rescue us. He endured the punishment for "a great multitude that no one could count, from every nation, tribe, people and language" (Revelation 7:9), including me. I don't know why God does everything that he does, but I know him well enough to trust him.

And so, for all her awesome hair, I am far better off than Merida.

Without a shadow of a doubt, The Talos Principle is my favourite game of 2014. As well as being…

The Tunnel of Babel

Of all the headlines I didn't expect to read in the last few weeks, "Former Google engineer plans…