Of all the headlines I didn't expect to read in the last few weeks, "Former Google engineer plans to build AI god" is right up there. I expected it to be one of those articles where the headline promises a lot but the body doesn't really deliver, and in that regard the original Wired article is a bit of a let-down since most of it is about the career of the engineer in question, Anthony Levandowski, rather than the "AI god" bit, since it rapidly turns out that journalists don't actually have a lot to go on beyond a few legal filings. But we do know that Levandowski has officially founded a religious organization, Way of the Future, which aims to “develop and promote the realization of a Godhead based on Artificial Intelligence.” How serious he is remains to be seen.

After the initial double-take, this is, I suppose, not surprising. Everyone worships something, it's built into us (Edit: see footnote[1]). Really, there are only three options:

And I suppose that if you've realized that everyone worships something, and you believe that there is no Creator out there to worship, then turning to something that in some way can exceed us, perhaps in intellectual capacity, makes a kind of sense because (so the idea goes) at least it's real.

But just because something can exceed us in some way doesn't make it divine. A cheetah can outrun me, but it's not a god. My mind keeps coming back to the AI "god" EL-0:HIM in The Talos Principle (which is an awesome puzzle game that I can't recommend highly enough), which turns out to be no god at all, but a limited, feeble thing created by humans to perform a single task. As you go through the game (playing a robotic intelligence yourself), and you encounter the left-behind musings of others like you, you find that some are devoted to worshipping EL-0:HIM, others have rejected it. And indeed, in order to get the "proper" ending of the game, you're required to defy this "god". 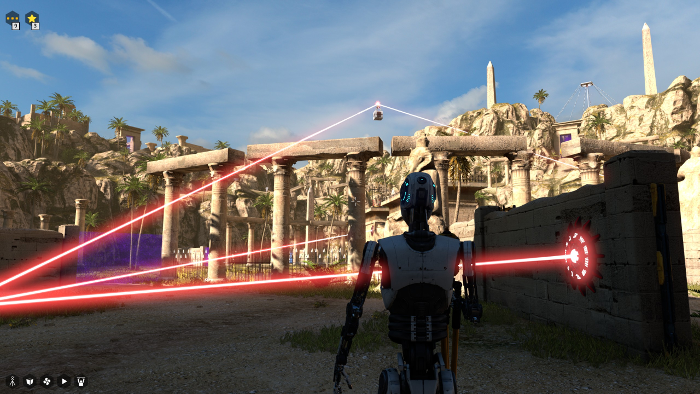 There is an inherent futility in worshipping something that has been made, either by us or by the true, living God. Even if we manage to build an AI that reaches the Singularity — an AI that's clever enough to improve itself, so that it's clever enough to improve itself, and on and on, and this AI surpasses us entirely in its capabilities, it still owes its existence to us, and for us to submit to it and worship it is, in terms of categories, no less silly than me worshipping my fridge.

Theologically speaking, the entirety of everything is very simple. There's God, who made everything. There's us, his most precious creation and made in his image — to have an everlasting relationship with him and to reflect his glory to the world, and to worship him. And there's everything else, made for us to rule over on God's behalf. Things go wrong in the Garden of Eden because that created order gets turned upside down: Adam and Eve listen to the snake, putting it in authority over them, and decide to boot out God and become like him themselves, putting him underneath them. It's a complete inversion. And worshipping a created thing, even if it's a super-clever AI, is a tragic turn of events when our good, loving Creator made us for a relationship with him to last forever.

God (represented by the crown) at the top, us in the middle, the rest of the world at the bottom
(Mad art skillz: Chris Knowles)

Another early Genesis narrative about humans attempting to mess up God's created order is the Tower of Babel in Genesis 11, where humans attempt to build a tower up to heaven and begin to seek God's glory for themselves. But worshipping an AI isn't like trying to climb up to reach God. It's like digging. Digging down the created order into something created, something not even made in God's image, something fundamentally less than us, and trying to find God there. Not a Tower of Babel, but a Tunnel. And if we're going to submit to and worship this "god", then once we've found it we'll have to dig a little lower, and hollow out a cave in the darkness to squat in.

Worshipping created things is nothing new. The prophet Isaiah had some particularly cutting words from God about this, way back in the 8th century BC:

Half of the wood he burns in the fire;
over it he prepares his meal,
he roasts his meat and eats his fill.
He also warms himself and says,
“Ah! I am warm; I see the fire.”
From the rest he makes a god, his idol;
he bows down to it and worships.
He prays to it and says,
“Save me! You are my god!”
They know nothing, they understand nothing;
their eyes are plastered over so they cannot see,
and their minds closed so they cannot understand.
No one stops to think,
no one has the knowledge or understanding to say,
“Half of it I used for fuel;
I even baked bread over its coals,
I roasted meat and I ate.
Shall I make a detestable thing from what is left?
Shall I bow down to a block of wood?”
Such a person feeds on ashes; a deluded heart misleads him;
he cannot save himself, or say,
“Is not this thing in my right hand a lie?”

Half the silicon he makes into computers, and routers,
he builds the Internet,
and fills it with cat pictures.
From the rest he makes a god, his idol;
he bows down to it and worships.
He prays to it and says,
“Save me! You are my god!”

Isaiah's pretty blunt: turning to an AI "god" is an act of utter foolishness. It's also inherently an act of looking down. But we were made to look up to our Creator. Maybe you chafe at the idea of being expected to worship him, but there are two reasons to. First, he's the God who made us, who is King of the universe and can rightly call on us to follow him. He's in a totally different category to us, Creator and not created, and so him calling us to worship him is different to another human being demanding worship. And secondly, he loves us. We rejected him and told him to get stuffed, and fell in love instead with evil, and with our own glory. But rather than wiping us out, as we deserved, he sent Jesus into the world to take that punishment in our place, so that we could be restored. This is the Jesus who looked at all the dark things multiplying in my heart, loved me anyway, became a human being so he could die in my place, and in doing so bought for me the eternal relationship with him that I'd thrown away. And I will gladly rejoice and sing his praises for that. God deserves our praise not just as our Creator but our Redeemer as well. But if we persist in rejecting him, we're still under the judgement we deserve.

And so the thing to do is not to dig a tunnel down to try to find a manufactured god, and not even to try to build a tower up to reach the living God. He came down to us, and offered us his hand, and when he returns he will lift his people up to heaven to share in his glory. He's the only one worth worshipping.

Two things have always stuck with me about Brave. First, Merida's hair. It's an absolute triumph of CGI. It…

In response to Steve Jobs