(This post is spoiler-free for the current, 10th series of Doctor Who)

We're coming to the end of Peter Capaldi's final series as the Doctor. He announced back in January that this will be his last series, and then he'll hand over to...well, we don't know yet. All I know is I enjoyed having a Doctor who was played by someone a little older and who brought a bit more gravitas to the role than Matt Smith could manage, and I'll be sad to see him go. Not least because he once played the electric guitar while riding a tank. (It really was him playing, too.) Capaldi has also given some excellent speeches as the Doctor, and it's one of those I want to talk about here. 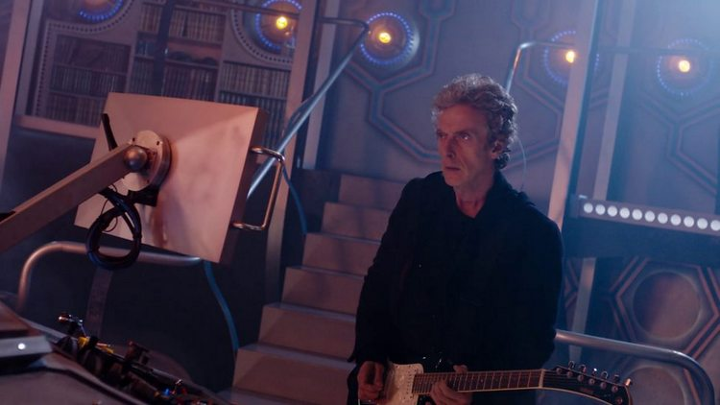 So I want to look back to series 9, to the unusual moments in the double episode The Zygon Invasion/The Zygon Inversion that gave it a decidedly Christian bent. The first moment couldn't really come much earlier — after some opening action and peril, just before the title sequence plays we cut to the Doctor playing Amazing Grace on his electric guitar (there it is again!). "Grace", in case you're wondering, is the Christian term for the undeserved goodness that God shows to us — the hymn rejoices that God would reach out and save "a wretch like me". That's all the hinting we get in the first episode that the subject of grace, and of forgiveness, will come up later. (Despite a bit of searching, I've been unable to find out whether the author of the two episodes, Peter Harness, is a Christian, but he's certainly done a pretty good job of representing the core of the gospel in an episode of a sci-fi series. It's not a perfect metaphor, of course, and if you push it too far it'll break, but it's worth a look.)

The next oddity is part way through the next episode. The Zygons have been peacefully hiding out on Earth disguised as humans (shape-shifting is the Zygons' schtick, alongside shooting lightning from their hands), but a group of rebels have gone rogue. They don't want to live a lie in secret, they want to take the Earth by force. Clara, the Doctor's assistant, has been captured by the rebels, and replaced by a high-ranking Zygon called Bonnie. Clara is kept unconscious in a pod, linked to Bonnie, but wakes up and starts to exert subtle influence over her, including making her unknowingly text the Doctor with the words "I'm awake". Shortly after this, the Doctor makes a video call to Bonnie, and Clara makes her wink to signal the Doctor. When he notices this, he comments on it. Bonnie says she's not winking but then does it again. The Doctor then comes out with:

You do know what "winking" means, don't you? You're sending out some very mixed messages here. You know I'm over two thousand years old, I'm old enough to be your Messiah. [emphasis mine]

It's a pretty weird remark. Doctor Who has usually given questions of religion (human ones, at any rate) a fairly wide berth. After all, when you have a time machine it's pretty easy to go and check whether Jesus rose from the dead. It's also an odd thing to say because Clara has never expressed any Christian faith. Given that the Doctor is talking to Bonnie, a Zygon, but talk of 2,000-year-old Messiahs only really makes sense if you're talking to a human, he may be using it as a covert signal to Clara that he knows she's listening. Whatever the reason, it's another hint that something Christianity-shaped may be in the offing.

But this is just foreshadowing. The real meat of the episodes' Christian slant comes at the climax of the story. Bonnie locates the two "Osgood Boxes", which have the power to end the war, one way or another. Two buttons, "Truth" and "Consequences", are in the top of each box. One box affects the Zygons' shapeshifting — one button will prevent the Zygons from keeping their disguises, provoking the war Bonnie wants, while the other will lock the Zygons into their human form forever, which is the situation she finds intolerable. The Doctor tries to talk her out of pushing one of the buttons. And so begins a set of speeches that are well worth watching if you haven't.

His opening gambit is to point out that cruelty just breeds cruelty. The only way to break the cycle of mistreatment at the hands of others is for someone to be prepared to forgive instead of retaliating. The Doctor asks her to forgive. This falls flat. Bonnie's response is "Why should we?" When the Doctor asks her to change her mind and call off the revolution, she refuses, saying "I will not stop this". Even a passionate speech telling her that if she starts the fighting, she has no idea who will die, whose children will "scream and burn", doesn't stop her, though she does start to look a little uncomfortable. (This bit caused quite a stir on social media. It was a particularly poignant speech at the time, since the episode happened to go out in November 2015 as various Western powers were deciding whether to launch airstrikes in Syria. The first British airstrike was on 3rd December.)

But then the Doctor changes tack. He doesn't ask Bonnie to show forgiveness, he offers it to her. 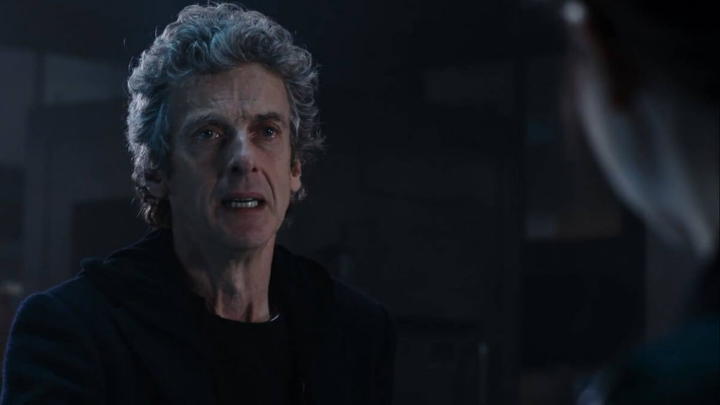 Bonnie: No, I'm not stopping this, Doctor. I started it, I will not stop it. You think they'll let me go after what I've done?
Doctor: You're all the same, you screaming kids, you know that? "Look at me, I'm unforgiveable." Well here's the unforeseeable, I forgive you. After all you've done. I forgive you.
Bonnie: (Close to tears) You don't understand. You will never understand.
Doctor: I don't understand? Are you kidding? Me? Of course I understand. I mean do you call this a war, this funny little thing? This is not a war, I fought in a bigger war than you will ever know, I did worse things that you can ever imagine, and when I close my eyes...I hear more screams than anyone would ever be able to count. And do you know what you do with all that pain? Shall I tell you where you put it? You hold it tight. Till it burns your hand. And you say this: "No-one else will ever have to live like this, no-one else will ever have to feel this pain. Not on my watch."

At this point, the Doctor has won the battle. It takes Bonnie a little while to stand down, but it doesn't take any more argument from the Doctor.

And the reason that the Earth was saved from war, and Bonnie was rescued from carrying on down the path she'd chosen for herself, was grace. The offer of undeserved forgiveness. It had the power to cut right through her thinking and change her course. When the Doctor asked her to forgive, he got nowhere, but when it was offered to Bonnie freely, and she accepted it, it saved the planet.

And so it is with us. We are all rebels, not against the Zygon High Command but against God himself. We are naturally hostile to him, with no intention of turning back to him by ourselves. So in order to win us back, he offers us undeserved forgiveness through Jesus. God took the initiative — Jesus has died, he's done everything necessary for us to be forgiven, and he simply holds it out to us. The Bible puts it this way: "But God demonstrates his own love for us in this: While we were still sinners, Christ died for us." (Romans 5:8)

This forgiveness is transformative. To realize that the creator of the entire universe, whom we've been busy turning away from our entire lives, loves us anyway and is willing to forgive us, can soften the stoniest of hearts of the most determined of rebels. To accept that forgiveness, to have whatever guilt we carry around lifted off our shoulders and taken away is the most liberating experience anyone can have. We are literally set free from slavery to sin. And so, with this shattering beginning, God sets about the work of transforming us into imitators of Jesus.

Being forgiven is, among other things, meant to drive us to be forgivers ourselves. We can see this in action in the Doctor. Once the tension is over and the episode is into its denouement, Bonnie addresses him:

Bonnie: I don't understand how you could just forgive me.
Doctor: Because I've been where you have. There was another box. I was going to press another button. I was going to wipe out all of my own kind. Man, woman, and child, I was so sure I was right.
Bonnie: What happened?
Doctor: Same thing that happened to you. I let Clara Oswald get inside my head. Trust me, she doesn't leave.

This is referring to the events of The Day of the Doctor. Having been reprieved from making the same mistake Bonnie was heading towards — indeed, the Doctor spent several centuries believing he had pushed the button and wiped out Gallifrey, and eventually learned the truth and had the guilt of that lifted from him — having been rescued from that mistake the Doctor is determined to make sure no-one else ever ends up trapped in that spot.

Having been forgiven by God, having had our sins dealt with, our guilt removed, and our relationship with him restored, drives us to offer forgiveness and reconciliation when others wrong us, and to share the good news of God's forgiveness with others. We might not be able to play Amazing Grace on an electric guitar on national television, but we have a better forgiveness to offer than the Doctor. He remarks at the end that this is, in fact, the sixteenth time the ceasefire has been threatened (the secret being kept by repeated memory erasure on a scale not seen since Men In Black). The Doctor's forgiveness only brings a temporary respite. But the forgiveness that Jesus offers, and that Christians can tell others about, is a once-for-all event that changes our status — permanently — from guilty rebels to forgiven children.

Come and be forgiven, and be set free.

Master Yoda, no room for grace has he

My last post was about the Doctor showing grace to someone — offering a Zygon forgiveness she didn't deserve, which…

Why G'Kar is a terrible spiritual leader

Babylon 5 is still one of my favourite sci-fi series, even though it finished nearly 20 years ago. It…