Babylon 5 is still one of my favourite sci-fi series, even though it finished nearly 20 years ago. It had the huge ambition to tell a single story over 5 years and, although things looked a bit ropey for a while and it seemed there might only be four series, it did achieve its goal and created one of the most compelling sci-fi series ever produced. A film reboot was announced in 2014, but since then it's been delayed. I do recommend B5 (if nothing else, the Centauri hairstyles are worth a look), but if you give it a go, be warned the first series in particular hasn't aged well, the pilot even less so with some classic 90s "apply hand to CRT monitor for scanning" technology. Later series, with bigger budgets and less of a tendency to dump large quantities of exposition on the audience, have survived much better. On the other hand series 1 did introduce us to the concept of being nibbled to death by cats.

One of the central characters, and by far my favourite, is G'Kar, the Narn ambassador, who goes through a deep transformation during the series. He was played with an exceptional performance by Andreas Katsulas, the One-Armed Man from The Fugitive and, more relevant to geeks, Commander Tomalak in Star Trek: TNG. G'Kar starts out as a violent bigot (with a certain amount of Tomalak's smug sarcasm), but ends up playing a major part in holding together an alliance of various alien races against a common enemy, which then becomes formalized in treaty as the Interstellar Alliance. He also, inadvertently, becomes a spiritual leader to many Narns. Just as he himself is a follower of G'Quan, a Narn who lived a thousand years ago, he finds himself surrounded by Narns calling themselves followers of G'Kar. And, unsurprisingly, they want him to teach them. But when he does so he reveals himself to be the worst kind of spiritual teacher (leaving aside the fact that he's not pointing them to Jesus) — he changes his message to please his hearers. 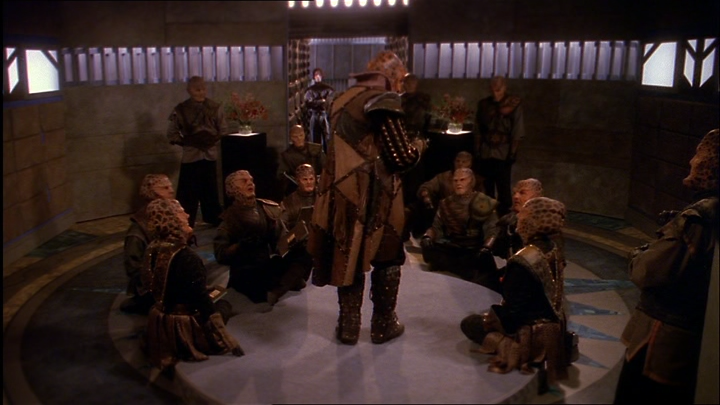 Narn: What is truth? And what is God?
G'Kar: You don't really want an answer to that question!
Narn: Yes, I do! Please!
G'Kar: If I take a lamp, and shine it toward the wall, a bright spot will appear on the wall. The lamp is our search for truth, for understanding. Too often we assume that the light on the wall is God. But the light is not the goal of the search, it is the result of the search. The more intense the search, the brighter the light on the wall. The brighter the light on the wall, the greater the sense of revelation upon seeing it. Similarly, someone who does not search, who does not bring a lantern with him...sees nothing.
(He pauses, and stands)
G'Kar: What we perceive as God is the byproduct of our search for God. It may simply be an appreciation of the light, pure and unblemished, not understanding that it comes from us. Sometimes we stand in front of the light and assume that we are the centre of the universe — God looks astonishingly like we do. Or we turn to look at our shadow and assume that all is darkness. If we allow ourselves to get in the way, we defeat the purpose, which is to use the light of our search to illuminate the wall in all its beauty, and in all its flaws, and in so doing better understand the world around us.
Narn: Ah, yes, but...what is truth? And what is God?
G'Kar: (laughing and exasperated) Truth is...a river.
(The gathered Narns are delighted with this pronouncement)
Narn: And what is God?
G'Kar: God is...the mouth of the river.
(More rapturous appreciation from the crowd. Satisfied, they leave.)

— Babylon 5, series 5, Meditations on the Abyss

There's not much for a Christian to take away from all that, although I do like his point that if we try to reason our way to God (rather than looking at what he's revealed about himself), we're likely to find a God who happens to agree with us on pretty much everything. But really it's his answer the second time round that I want to focus on. Consider these verses from Paul's second letter to Timothy:

In the presence of God and of Christ Jesus, who will judge the living and the dead, and in view of his appearing and his kingdom, I give you this charge: Preach the word; be prepared in season and out of season; correct, rebuke and encourage—with great patience and careful instruction. For the time will come when people will not put up with sound doctrine. Instead, to suit their own desires, they will gather around them a great number of teachers to say what their itching ears want to hear. They will turn their ears away from the truth and turn aside to myths.

Timothy is charged with sticking, unswervingly, to the truth about God that he's revealed through his word, the Bible (which is now a fully-complete anthology, but Timothy would have had a bit less to work with). This is methodical work, requiring careful study and explanation, and Paul takes it as read that all Christians will need correcting, rebuking, and encouraging day by day, week by week, year by year. But Timothy will face temptation to alter his message, because people won't always want to hear God's truth clearly explained in all its fullness - they'll want something that doesn't really challenge them, that's all encouragement to keep doing whatever they're doing, with no correction or rebuke. They want a god that looks astonishingly like they do. But down that path lies ever greater deviation from the truth.

Timothy's charge is to keep teaching the truth, even when it's unpopular, precisely because it's God's word to us. Two episodes before Meditations on the Abyss, G'Kar daren't become a teacher for the Narns because he's afraid that he might lead them down the wrong path. And yet now, even though he's pretty sure he hasn't got a firm grip on the truth yet himself, even what little he does believe he understands he's willing to throw out when it's clear that it's not what his hearers want him to say. If you're going to take on the task of spiritual leader, then ditching what you believe for the sake of a quiet life is out of the question. As the Narns leave, Stephen Franklin, the station's Chief of Medical Staff, exchanges glances with G'Kar in a "what can you do, eh?" kind of way. That attitude only really makes sense if your thinking is along the lines of "huh, those daft Narns, they just don't get it do they?" But they're a bunch of people looking for spiritual truth, who are struggling to shift their mindset and grasp what their leader is trying to tell them, and rather than helping them to wrestle with what he's saying he gives up on them and sends them away with a soundbite instead.

I know that not everyone reading this blog is a Christian. Obviously I am one, and I'm going to tell you that the only place you're going to find spiritual truth is in the Bible. But wherever you end up looking for spiritual reality, I hope you'll agree that you'll get no help from anyone who is in the business of telling you whatever you want to hear, whether that's because they're not actually terribly fussed about you finding any spiritual truth as long as you're comfortable, or because they're hoping to get you to give them money or similar. When people do this under the guise of Christianity, the former leads to liberal theology, and the latter to what's known as the "Prosperity Gospel".

Perhaps today you're not ready to come to Jesus. But I hope you are at least ready to run a mile from anyone who shies away from hard spiritual truths, and tells you only what your ears want to hear.

The Grace of the Doctor

(This post is spoiler-free for the current, 10th series of Doctor Who) We're coming to the end of Peter…

To the surprise of no-one who's met me, I read a lot of fantasy novels. Some of my favourites…