To the surprise of no-one who's met me, I read a lot of fantasy novels. Some of my favourites are the Malazan Book of the Fallen series by Steven Erikson. The scope is phenomenal, and there's a freshness to the worldbuilding that meant I was left genuinely disappointed when dragons were first mentioned; they seemed somehow pedestrian compared to what had gone before. And as the books introduce you to characters on different sides of the various conflicts it becomes increasingly (and pleasingly) difficult to pick a side. The series is also surprisingly philosophical, with various characters musing on the qualities of civilization and humanity. Only once, though, have I seen a character catch hold of a fundamental Christian truth and run with it, and that character is Itkovian Otanthalian. 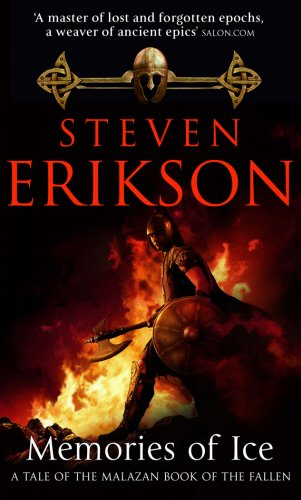 Itkovian shows up in two books in the series (and yes, spoilers ahead). The first is book three, Memories of Ice, at the end of which he dies. He then returns as a nascent godling called the Redeemer in book eight, Toll the Hounds. Parallels between Itkovian-as-Redeemer and Jesus are obvious on the face of it, although there are problems with Itkovian's redemption that I may tackle in another post sometime. (Briefly, though, while Jesus died to take our punishment in our place, Itkovian's redemption sweeps wrongdoing under the carpet as though evil and justice don't matter.)

What I want to talk about here, though, is the manner of Itkovian's death. One of his roles as the Shield Anvil of the war god Fener is to absorb the pain of others on Fener's behalf. By the end of Memories of Ice Fener has been pulled out of his realm and is no longer there to act as a backstop. Itkovian carries on absorbing people's pain, however, and holds it within himself. In the final pages, he encounters the undead armies of the T'lan Imass. There are tens of thousands of them, and they're almost 300,000 years old. As you might imagine, they hold a lot of pain. Itkovian takes the lot. This kills him, but before he dies the T'lan Imass desperately question him (telepathically, hence the odd punctuation) to find out why he would do such a thing for them:

"But we still do not understand — your...generosity. Your compassion. And so we ask again. Why have you done this for us?"
Sirs, you speak of compassion. I understand something, now, of compassion. Would you hear?
"Speak on, mortal."
We humans do not understand compassion. In each moment of our lives, we betray it. Aye, we know of its worth, yet in knowing we then attach to it a value, we guard the giving of it, believing it must be earned. T'lan Imass. Compassion is priceless in the truest sense of the word. It must be given freely. In abundance.

This is probably the single most valuable thing I've ever read in a fantasy novel. Nobody has ever had compassion like Jesus, and Christians are called to emulate him, but very often I find that my own compassion is a rather stunted thing. Perhaps because I love things too much and people not enough, or because my heart is hard and I find myself unwilling to help those who've got into trouble of their own making. Perhaps I guard the giving of compassion because giving it will be costly. But that is not Jesus' pattern — right at the core of the gospel is the fact that if we had to earn God's compassion and forgiveness, no-one would be able to. But God didn't ask us to earn it, he sent Jesus to die in our place. God had compassion on a species busy with the work of rejecting him. It's no surprise therefore that Jesus said that the greatest commandment after loving God wholeheartedly is "Love your neighbour as yourself" (see Mark 12:28-34), or that he told his followers to love their enemies (Matthew 5:43-44). Syrian refugees, homelessness, finding someone you don't get on with crying in the loo at work, all of these are situations where Jesus' call to compassion should guide a Christian's response.

Compassion isn't just about straightforward support, or being "touchy-feely"; Jesus' compassion led him to press home some hard truths, for example when a rich young man asked him what he had to do to inherit eternal life:

Jesus looked at him and loved him. “One thing you lack,” he said. “Go, sell everything you have and give to the poor, and you will have treasure in heaven. Then come, follow me.”
At this the man’s face fell. He went away sad, because he had great wealth.

Jesus was confronting this guy with the fact that he valued money more than God, and that this was preventing him from putting God at the centre of his life. He'd claimed that he'd kept all the commandments since he was a boy, but Jesus showed him that he was breaking the first of the ten commandments — "You shall have no other gods before me" (Exodus 20:3). And he did this because he loved him, because he had compassion.

The greatest act of compassion ever, though, was Jesus' death on the cross. His sacrifice, and what it achieved, far outstrips Itkovian's. Itkovian eased the pain of a vast crowd of beings (not a bad thing, I hasten to add), but Jesus' death takes our guilt away makes it possible to be right with God and therefore opens up the way to eternal life. There was no life in Itkovian's gift.

The best place to look for the Christian pattern for compassion is Jesus himself. Those who have experienced Jesus' gift are driven — often slowly and falteringly, but prompted by the Holy Spirit — to reflect that compassion to the world. But nonetheless I'm grateful that Memories of Ice came onto my radar, and that Itkovian is there to challenge me when I put a value on compassion.

Why G'Kar is a terrible spiritual leader

Babylon 5 is still one of my favourite sci-fi series, even though it finished nearly 20 years ago. It…

As far as its gameplay goes, I find 2016's version of Doom hard to fault. It manages to retain…