As far as its gameplay goes, I find 2016's version of Doom hard to fault. It manages to retain what made the 1993 original so compelling: a fast pace, an emphasis on combat to the exclusion of everything except looking for secrets, and an undeniably visceral feeling of badassery. It also has an excellent soundtrack which I find myself regularly listening to at work. It's a game I heartily recommend — people tell me the multiplayer isn't great, but I haven't tried it myself. I do take issue, however, with Doom's portrayal of evil. I don't mean in the sense that DEMONS ARE INVADING MARS, HALP! Punching a Cacodemon in the eye isn't something I find inherently problematic. What I'm talking about is what Doom tells us about where evil resides, and how we deal with it.

First, the where. In Doom, evil is something "out there", that intrudes on our existence from outside and needs to be beaten back. Doom is short on characters, the population of the Mars base having been either killed or turned into a variety of demonic creatures, but there are two humans we interact with over the course of the game. The first is Samuel Hayden, who built the Mars facility and knowingly started siphoning energy out of Hell. He's not portrayed as evil, simply misguided; he believed, and continues to believe even at the end of the game, that Hell can be controlled and humans can afford the risk inherent in trying to steal its energy. The other is Olivia Pierce, who is actively trying to bring about the demonic invasion. But even she isn't painted as actually evil. Hayden comments at one point that she's come under the influence of the demons, that he'd hoped she'd be able to resist their pull. Her final words are "they promised me so much". Despite all that she's done and the huge number of human lives her actions have cost, the final verdict on her is, astonishingly, that she just fell in with a bad crowd.

Doom leaves us with the impression that evil is not an inherent human quality. It's an attractive message, because it tells us that we are not a source of evil, only victims of it. Even if we commit some terrible act we can take the Olivia Pierce defence of a malign outside influence. But this is entirely at odds with the Bible's conclusion on the source of evil:

Paul here is drawing together lines from a couple of Psalms, and Ecclesiastes; the idea that evil is a problem deep within the human heart shows up all over the Bible. In Romans 1:30, Paul says of mankind "they invent ways of doing evil". A cursory glance at the news will show that Paul is right — murder, rape, abuse, blind eyes turned to the sufferings of others, are not actions that people take because some external force compels them to. People do these things because they choose to. And this is a universal human problem; I may not have a criminal record, but can I meet Jesus' standard for being innocent of murder? Not a chance.

So Doom's message about where evil comes from is dangerously wrong, because it leads us to believe that the problem doesn't come from within us, and therefore prompts us to believe that we don't need the forgiveness Jesus died to win. But even if we deal with that, and come to believe that there is something inherently wrong with us, we can still run headfirst into the second problem with Doom's version of evil: it tells us that we can defeat it ourselves with a bit of effort. It tells me that the person best placed to defeat evil, the one person that the legions of Hell are afraid of is...me. Sure, I've been given some highly useful abilites like being able to carry an implausible number of guns and an autosave feature, but ultimately it's my actions that succeed. But as long as I am a wellspring of evil, I can't possibly defeat it myself. Don't get me wrong, plenty of people have won victories over evil and put an end to great injustices, but as long as our hearts are engines of evil and our blood its fuel, it will march on until something or someone from outside our species stops it. The problem is the fundamental nature of our hearts.

Doom is right about one thing, however. There is one person that the demonic legions have been afraid of since time immemorial and who will defeat evil. He is a man but also God, and there is no evil in him. Two demons met him once, and their fear was obvious:

When [Jesus] arrived at the other side in the region of the Gadarenes, two demon-possessed men coming from the tombs met him. They were so violent that no one could pass that way. “What do you want with us, Son of God?” they shouted. “Have you come here to torture us before the appointed time?”

Jesus didn't torture them, that's not in his character. But he really will defeat evil in one big final battle. And this is either great news or terrifying news, depending on who you are. The book of Revelation paints a battle scene that is, if anything, gorier than anything in Doom (the preceding verses make it clear that "the rider on the horse" is Jesus):

And I saw an angel standing in the sun, who cried in a loud voice to all the birds flying in midair, “Come, gather together for the great supper of God, so that you may eat the flesh of kings, generals, and the mighty, of horses and their riders, and the flesh of all people, free and slave, great and small.”

Then I saw the beast and the kings of the earth and their armies gathered together to wage war against the rider on the horse and his army. But the beast was captured, and with it the false prophet who had performed the signs on its behalf...The two of them were thrown alive into the fiery lake of burning sulfur. The rest were killed with the sword coming out of the mouth of the rider on the horse, and all the birds gorged themselves on their flesh.

Revelation is apocalyptic literature, and is full of picture-language that's not meant to be taken literally, but it's clear that Jesus will take on evil, and that he'll win, and that this isn't about slaying demons but will mean waging war against humanity. The problem with Jesus dealing with evil is that it means dealing with us. The Bible tells us that if Doom is an analogy for reality, we're not playing the part of the Doom Slayer. We're the demons. 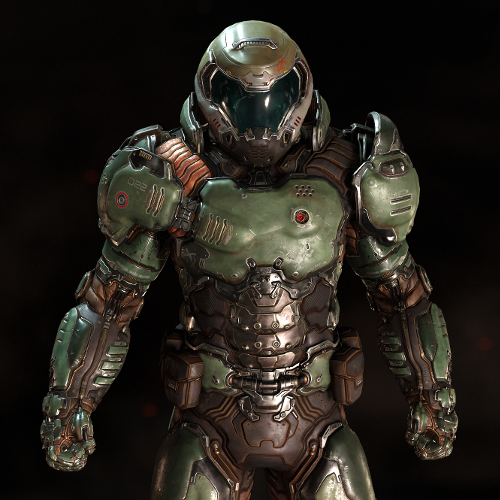 The Doom Slayer:
Like Jesus, but without the mercy. Sort of.
(Image: id/Bethesda)
So where's the good news? Jesus has also carried out a rescue plan, to save those who turn to him from being swept up in evil's defeat. The Cyberdemon and the Spider Mastermind are child's play, Jesus killed death, and he did it by dying. It sounds almost ironic. It sounds like defeat — gaming teaches us that death and defeat are generally the same thing. But the point is that he was dying in our place, taking our judgement on himself. The Doom Slayer is relentless — at one point Hayden remarks "I've watched you work, come to understand your motivation. You think the only way is to kill them all, leave nothing behind." But Jesus is full of mercy, and those who turn to him are forgiven on the basis of Jesus' death, and have eternal life on the basis of his resurrection.

To the surprise of no-one who's met me, I read a lot of fantasy novels. Some of my favourites…

Cthulhu may not be lovable, but he has one crucial thing in common with Christians - he sleeps rather than dies.…