Cthulhu, currently waiting at the bottom of the Pacific Ocean until the stars are right and he can escape R'lyeh, is a hard character to like. Sure, he's popular, and even people who've never heard of him or his creator, Howard Phillips Lovecraft, will perhaps have seen some of the homages to him and others of Lovecraft's creations that keep popping up — music by Metallica, the Arkham Horror board game, the Arkham Asylum where Batman's more insane enemies are kept, the Necrotelecomnicon in Terry Pratchett's Discworld series, and of course Cthuloops. It's hard not to see a hint of Cthulhu in the Ood in Doctor Who. But he's not considered polite company. For starters, he has some extreme political views:

That cult would never die till the stars came right again, and the secret priests would take great Cthulhu from His tomb to revive His subjects and resume His rule of earth. The time would be easy to know, for then mankind would have become as the Great Old Ones; free and wild and beyond good and evil, with laws and morals thrown aside and all men shouting and killing and revelling in joy. Then the liberated Old Ones would teach them new ways to shout and kill and revel and enjoy themselves, and all the earth would flame with a holocaust of ecstasy and freedom.

— H.P. Lovecraft, The Call of Cthulhu

Despite the Doctor's herculean effort to teach us not to judge anyone, Ood or otherwise, by their appearance, Cthulhu is also likely to struggle anywhere with a dress code...

...a monster of vaguely anthropoid outline, but with an octopus-like head whose face was a mass of feelers, a scaly, rubbery-looking body, prodigious claws on hind and fore feet, and long, narrow wings behind.

— The Call of Cthulhu 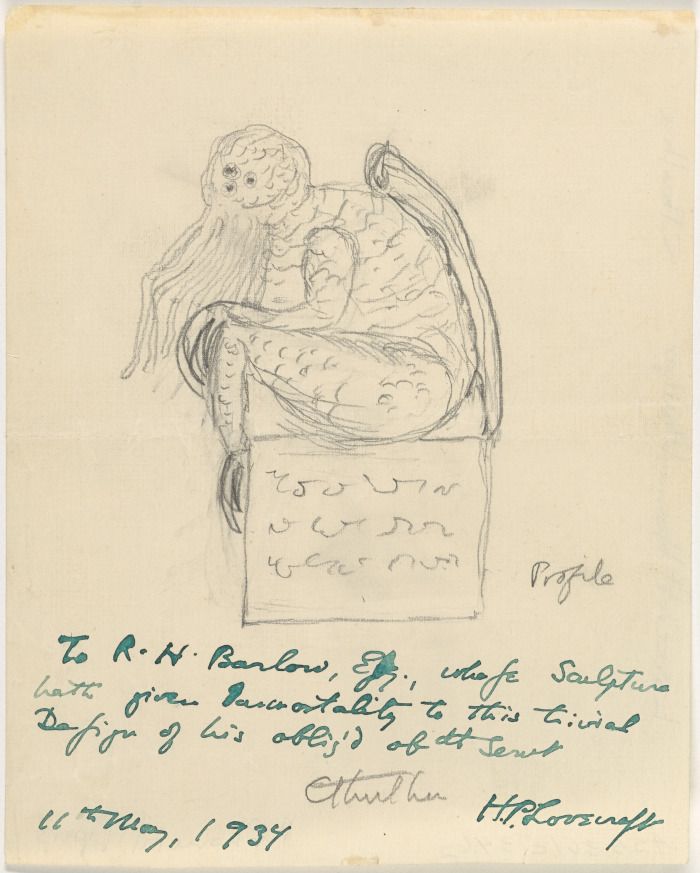 Lovecraft's own rendering of Cthulhu. Oddly, I don't think I've ever seen anyone else draw him with what look like three sets of eyes.

Have a read of The Call of Cthulhu if you haven't before, it's a seminal work in horror. (Lovecraft died in 1937, so in most of the world his work is now in the public domain. He did not, alas, rise above the casual racism common in his day, as will become apparent in the story.)

For all that he is a hideous, brutal, alien creature from another part of the universe and mercifully trapped under the Pacific Ocean, it may surprise you to learn that Christians are quite a lot like Cthulhu. Consider the famous quotation from the Necronomicon:

This description is meant to refer to Cthulhu – that although he's trapped in R'lyeh and apparently dead, he's waiting until 'the stars are right' and R'lyeh rises, and then he'll be able to roam free across the earth again.

But it's pretty apt for Christians, too. The Bible frequently refers to Christians who've died as being 'asleep', the implication being that this is a temporary state. The record of the stoning of Stephen in Acts 7, the first Christian to be killed for following Jesus, ends with the line 'When he had said this, he fell asleep' (7:60). Paul writes to the Thessalonian church saying 'Brothers and sisters, we do not want you to be uninformed about those who sleep in death, so that you do not grieve like the rest of mankind, who have no hope.' (1 Thessalonians 4:13)

As Christians, we know we'll rise to life again if we've died before Jesus returns, because he himself rose from the dead to pave the way. We can lie as long as it takes for that appointed day to arrive and so we are not dead, merely asleep.

And when Jesus rose, death died. It was defeated, and cannot hold God's people. Was that a strange aeon? What period in history could be stranger than when the eternal creator of the world willingly entered it in order to die at the hands of those he made?

As far as its gameplay goes, I find 2016's version of Doom hard to fault. It manages to retain…