Star Trek has always painted a positive view of humanity's future, both in terms of the highly egalitarian Federation it portrays, with the virtual eradication of poverty to the point where even money is largely obsolete, and in terms of how people treat one another. The very first episode of ST:TNG goes all in on this idea when Q puts humanity on trial on a charge of being a "grievously savage race", and the Enterprise crew have to show otherwise, which Q has to grudgingly admit they do. The next time Q shows up, Picard lays out Star Trek's vision for humanity's trajectory through the words of Shakespeare: 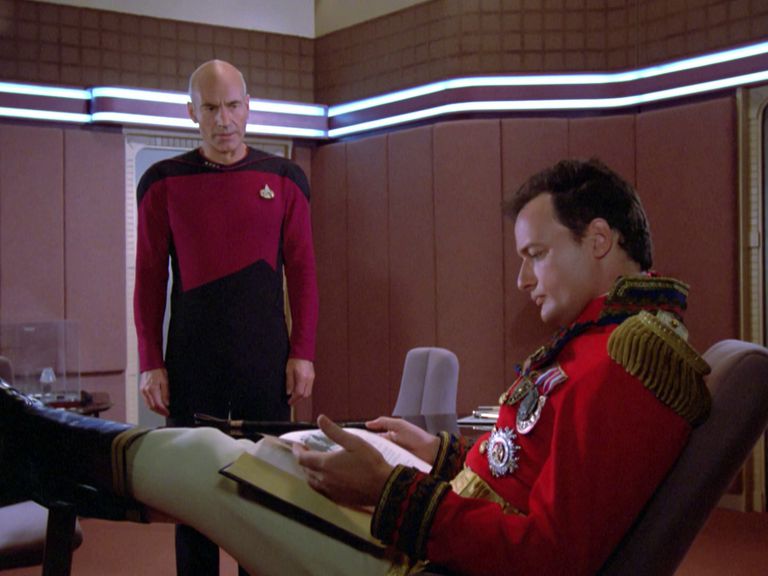 Picard: Oh no, I know Hamlet, and what he might say with irony I say with conviction: What a piece of work is man! How noble in reason. How infinite in faculty. In form, in moving, how express and admirable. In action how like an angel, in apprehension how like a god.
Q: Surely you don't see your species like that, do you?
Picard: I see us one day becoming that, Q.

It's easy to see the attraction of the recurring themes of Star Trek — the treasuring of life, the desire to understand and share with those who aren't like us, the desire for peace and justice, a society that looks after everyone including and especially the vulnerable and helps them to contribute to the whole. Indeed, when the crew encounter humans from the past, they're generally astounded by life in the 24th century. Sticking with TNG, in the episode The Neutral Zone Ralph Offenhouse, frozen in the late 20th century at the point of death and revived by the Enterprise crew, struggles at first to adjust to the new way of things. He wants to get in touch with Earth to see how his financial investments have turned out. Picard is more worried about the Romulans potentially crossing the Neutral Zone. After considerable back and forth, with Picard showing exasperation turning into wry amusement, their clashing worldviews are laid out.

Picard: A lot has changed in the past three hundred years. People are no longer obsessed with the accumulation of things. We've eliminated hunger. Want. The need for possessions. We've grown out of our infancy.
Offenhouse: You've got it all wrong. It has never been about possessions. It's about power.
Picard: Power to do what?
Offenhouse: To control your life, your destiny.
Picard: That kind of control is an illusion.
Offenhouse: Really? I'm here, aren't I? I should be dead, but I'm not.

— Star Trek: The Next Generation, Series 1, Episode 26, The Neutral Zone

By the end of the episode, Offenhouse has mellowed a bit, but still doesn't really see how life works in the 24th century.

Picard: This is the 24th century. Material needs no longer exist.
Offenhouse: Then what's the challenge?
Picard: The challenge, Mr Offenhouse, is to improve yourself. To enrich yourself. Enjoy it!

But the "ancient" human who probably has the hardest time believing what he's seeing is Samuel Clemens (aka Mark Twain), who ends up on board the Enterprise briefly due to a bit of time travel. He sees the Enterprise as a warship of conquerors, and Troi has to talk him round.


It's not hard to see why Clemens struggles to believe what he's seeing. Star Trek presents a very modernist view of humanity — the idea that given time and effort, we can fix humanity's problems and become a better species, a better society. The Enterprise-D was even built at shipyards orbiting the (real) Martian site of Utopia Planitia, the "Plain of Paradise"; it's not hard to imagine that site being chosen for its symbolism. TNG takes place just over 300 years after World War III and the resulting Post-Atomic Horror, so the rate of progress, once started, would have been even quicker than Clemens would have realized.

Given that human history is full of wars, vain ambition, oppression, and intolerance, as well as environmental and economic disasters brought about unintentionally by our ignorance, the idea that we can build a Star Trek-like world does seem hard to believe. And the reason it seems unattainable is because it ignores what we can see (but might not necessarily articulate) as the intractable problem of human evil. We humans are not blank canvasses when we're born, potentially formed into good or bad people by our environment and upbringing. Nobody has to teach small children to lie or steal their siblings' toys. They work that out all by themselves. At our core, we are selfish, putting ourselves first at the expense of others and also, the Bible tells us, rejecting God. Paul sums up the human condition in Romans 3:

Paul even notes that "[people] invent ways of doing evil" in Romans 1:30. And let's face it, this is the kind of humanity we see around us, that Samuel Clemens talked about in that clip. Sure, humans have also been known to show compassion, honour, bravery, self-sacrifice. But the driving force behind so much of what has taken place on this planet over our history has been the evil at our cores. Given that this is a Christian blog, it's no great spoiler that the solution to evil is not our efforts, but being rescued and transformed by Jesus — indeed, I've written about that before if you want to read more on that topic. Suffice to say that we're our own worst enemies on this front, and evil will prevent us building a future as utopian as Star Trek's. (Which is not to say we shouldn't strive for positive change, only that with 7 billion sinners to contend with, progress will be temporary.)

But here I want to focus on the allure of a future like Star Trek's. Who doesn't long for a world without poverty or oppression? Even if we can't muster up the enthusiasm to get off our backsides and do anything about it, pretty much everyone would agree it's a good idea. On the subject of universal provision, if you're of the persuasion that balks at the idea of people getting something for nothing, of being able to sponge off the efforts of others, then note that the Federation seems to be filled with people who've been raised to want to contribute to society in some way, including those who choose to join Starfleet. (And even then, in an era where material scarcity has been abolished, the cost to society in the case of some who may not chip in is close to zero.) Some folks may be artists or similar, choosing to contribute in less tangible ways, but the Federation is a society that chooses to value this and allows people to support themselves while doing so. As potential futures go, Star Trek has a lot going for it.

More than that, though, while the people and societies of Star Trek are still flawed, we long to live in a perfect society, with zero injustice or mistreatment. While Star Trek's medical sciences are way ahead of ours, we long for a world with no disease or infirmity, or even death, altogether. And it's only natural that we long for those things — in terms of our own ability to bring about change, hoping for those things is just wishful thinking, but at the same time we are longing for the world we were designed to live in. We were made for a perfect relationship with God and to enjoy that relationship forever in a perfect world. Our sin has made a mess of this world, but God has promised to provide a new Creation for his people one day:

Then I saw a new heaven and a new earth, for the first heaven and the first earth had passed away, and there was no longer any sea. I saw the Holy City, the new Jerusalem, coming down out of heaven from God, prepared as a bride beautifully dressed for her husband. And I heard a loud voice from the throne saying, “Look! God’s dwelling place is now among the people, and he will dwell with them. They will be his people, and God himself will be with them and be their God. He will wipe every tear from their eyes. There will be no more death or mourning or crying or pain, for the old order of things has passed away.”

This is what we were made for, and what God's people are heading for. It is the final, completed expression of God's love for the creatures he made. Of course we long for it — we were made in his image, for a relationship with him, and therefore even though we are twisted by sin, on some level we know that this world is not right, that something is missing. When we watch Star Trek, we see something a step closer to the perfect new Creation, and it tugs at our hearts. And when our hearts do this, they're telling us something. We're missing something that only God can provide.

If we want to live in a perfect world, our own Utopia Planitia, then we don't need flawed human efforts, we need the intervention of God. And if we turn to him, something even better than Star Trek is on offer.

Being a game developer, I occasionally get asked about games by concerned parents and whether they're good for their…

In my last post I wrote about The Talos Principle (TTP), which asks why, in the book of Genesis,…