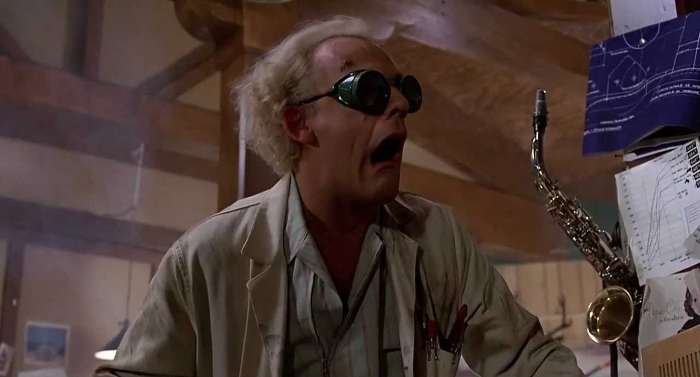 Doc Brown: not a fan of paradoxes
(Image: Universal Pictures)

Occasionally at work, someone will bring a stack of books or DVDs or games into the office and leave them in the kitchen, either with a sign reading "free to a good home", or a cup and a sign reading "pay what you want". It was because of one of these clearouts that I eventually picked up a copy of Richard Dawkins' The God Delusion a few years after it was published. It's a somewhat frustrating read as a Christian, because although Dawkins talks about religion at length, he never really tackles the core of Christianity. Either Jesus rose from the dead or he didn't — this is a question of historical fact and by the Bible's own admission Christianity stands or falls based on whether or not this happened:

Going on the preface to the paperback edition Dawkins' response would, I imagine, be that he doesn't need to tackle this since he's discussing whether God exists from first principles, and in any event these fairy tales are clearly daft since people just don't rise from the dead after three days. This issue with this, however, is that science, which takes measurements and tests hypotheses, is ill-equipped to deal with the claim that the fellow running the universe might change the rules occasionally. Or more accurately that the ruler of the universe, who happily allows us a consistent world most of the time (it's nice that the transistors in my computer work every day, I'd be out of a job otherwise), sometimes decides to do something different. Not because the rule change would have been unmeasurable (indeed, we have plenty of eyewitness accounts attesting to Jesus' death and resurrection), but because we're not, by ourselves, capable of producing an experiment to test the scenario.

Certainly, despite God flagging it up repeatedly with centuries of prophecy, and Jesus himself speaking about it often, when Jesus rose it nonetheless took everyone (even the disciples) by surprise. But saying that Jesus couldn't possibly have risen from the dead because science says so is like saying that the writers of Star Trek couldn't possibly have invented a 3D version of chess because you've read the rules and they quite clearly call for a flat 8-by-8 grid.

It's worth pointing out, on the "I don't need to deal with the ins and outs of Christianity" front, that the reverse argument applies. It doesn't matter whether or not Aquinas's proofs of God's existence hold up to scrutiny, it doesn't matter how good an explanation of the world we see around us evolution provides[1], it doesn't matter how much evil has been done by sinful human beings in the name of any god — if Jesus really did rise from the dead, all that ink has been spilled for nothing.

Nonetheless, there were one or two moments as I read the book where what Dawkins said gave me pause — I found I had to put down the book and think through what he'd said until I found the flaw and could carry on, because if someone really could show that the Bible can't possibly be true (which would leave Jesus' resurrection in jeopardy), I'd have to take that seriously. One bit in particular was something he says in passing at the start of chapter 3, Arguments for God's existence:

Incidentally, it has not escaped the notice of logicians that omniscience and omnipotence are mutually incompatible. If God is omniscient, he must already know how he is going to intervene to change the course of history using his omnipotence. But that means he can't change his mind about his intervention, which means he is not omnipotent.

At this point I had to stop and have a think. I believe in an omnipotent and omniscient God, and at first sight this argument seems pretty compelling. If God really is both omnipotent and omniscient, there must be a solution to this apparent paradox. Dawkins is manifestly a highly intelligent man, and I put the fact that I could see the solution when he couldn't down to my being more familiar with the way the Bible talks about God than he is. At its core, it comes down to something that Doc Brown says to Marty McFly in Back To The Future III. Stuck in 1885 with a broken-down DeLorean, Doc Brown proposes pushing the car to 88mph using a souped-up steam train along a three-mile stretch of track leading to a ravine. Marty points out that, according to the map, there's no bridge, so they head out to look:

Marty: Well, Doc, we can scratch that idea. I mean, we can't wait around a year and a half for this thing to get finished.
Doc: Marty, it's perfect, you're just not thinking fourth-dimensionally!
Marty: Right, right. I have a real problem with that.
Doc: Don't you see? The bridge will exist in 1985. It's safe and still in use. Therefore, as long as we get the DeLorean up to 88 miles per hour before we hit the edge of the ravine, we'll instantaneously arrive at a point in time where the bridge is completed. We'll have track under us and coast safely across the ravine!

— Back To The Future III 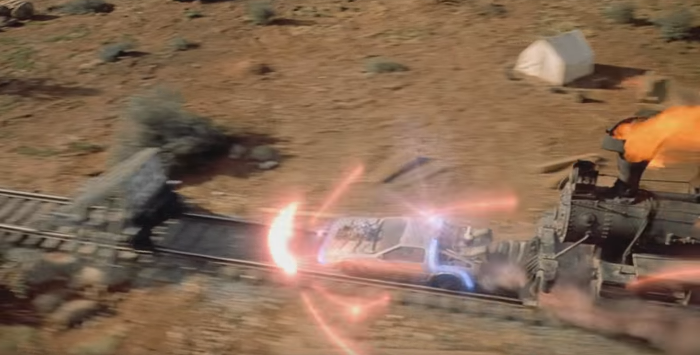 Fourth-dimensional thinking means this isn't as bad as it looks...
(Image: Universal Pictures)

The problem with Dawkins' formulation is that it doesn't think fourth-dimensionally. It assumes that God can't act on, say, a week next Friday until a week next Friday rolls around. And as soon as your definition of omnipotence, entirely independent of what you're saying about omniscience, includes something God can't do (acting in the future), it's a pretty weak definition of omnipotence. Or, to put it another way, it's a bit odd that God's omniscience is allowed to act forward in time but his omnipotence isn't.

Imagine rather an omnipotent, omniscient being that can both see and act across time. Such a being would see the universe in a very different way to us. This being would see all of space and time laid out, and would be able to act at every moment in time and every point in space simultaneously (as much as "simultaneously" makes sense in this context). Such a being would be totally sovereign over every aspect of the universe. And this is exactly the picture of God that the Bible gives us. Paradox resolved, I read on.

So although Doc Brown might be daft enough to think that stealing plutonium from Libyan terrorists is a good idea, he's spent enough time thinking about time to help us understand something about God. Hurrah for banging your head on a toilet seat.

In response to Steve Jobs

I've come rather late to Warhammer 40,000. A good friend of mine, our youth worker at church, has…